On December 17, 2022 at 17.00 Valters Pūce and Dainis Tenis will perform music from the concert programs - "Made in Latvia" and "Without electricity!" at the Mujānu Society House.

The concert will include pearls of world popular and classical music, as well as arrangements of songs by Latvia's greatest composers for cello and piano. They will allow you to immerse yourself in the memories of the times when their original versions were created, as well as listen to never-before-heard moods. The premieres will be heard, as well as compositions such as Mārtiņš Braun's "Soul", Zigmārs Liepiņš's "Quasimodo's Song", Raimonds Macat's "Northern Wind", Imanta Kalniņš's " Wrap Your Hands", Uldas Marhilēvičs' "Request", "Ballad from the show "Šveiks", Raimonda Paula "Carrie's Song", "Una Mattina" by Ludovico Einaudi, “White Swan and Black Swan” by Camille Sensance and Peter Tchaikovsky. Several Christmas carols will also be played at the concert to complement the Christmas mood, but let it remain a secret! 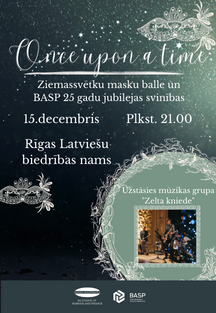 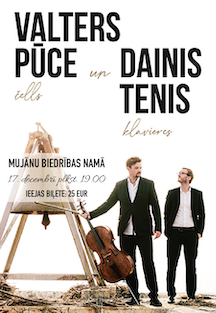